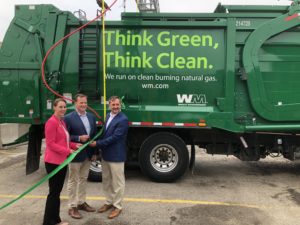 The company invited local dignitaries and members of the public to a ribbon-cutting ceremony at its London facility on Sept. 13, where it highlighted the environmental benefits of converting to natural gas.

“This is the 139th CNG fueling station we are christening across North America, and the 11th in Canada,” said Aaron Johnson, area vice-president, Waste Management of Canada, adding about 50% of the company’s fleet operating in Eastern Canada is now powered by natural gas.

In London, the company has eight CNG front-end loaders on the streets today, with eight roll-off trucks arriving in the fourth quarter. A rear-loader will bring the total to 17 trucks this year, with six more being delivered in 2020. There are 36 fill lines at the London terminal, where trucks are fueled overnight.

CNG trucks produce 15% less greenhouse gas emissions than diesels, and eliminate the need for about 8,000 gallons of diesel per year. NOx is decreased by about 50%.

“And for the community, they’re much quieter. You don’t hear the rumbling of those diesel trucks at 5 or 6 a.m.,” Johnson noted.

Jeff Yurek, Ontario’s Minister of the Environment, Conservation and Parks, and an MPP for London, was on-hand for the ceremony. He said the conversion plans into the province’s environmental plan, involving the wider adoption of lower carbon-emitting vehicles.

“We’ve taken a special turn toward focusing on heavy-duty trucks,” he said of the province’s environmental strategy. “We will have a Drive Clean program for heavy-duty vehicles coming soon. We are very proud you are taking the opportunity to use CNG in your fleet. It’s greener, it’s better than diesel and it’s a step further in lowering our emissions.”

He also said the province is committed to maintaining the tax exemption on natural gas, and will remove red tape to allow more filling stations to be built along the 400-series highways.

Joey Meyers, district fleet manager, said the new technology is being embraced by drivers and technicians at the fleet. The trucks’ CNG tanks have a capacity of 3,600 psi. They’re brought in for preventive maintenance inspections every 200 hours. The trucks are powered by the Cummins ISL G 9-liter engine.