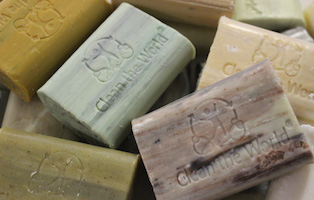 Clean the World is one of the charities that Hilton works with to recycle soap.

MCLEAN, Va. –The Hilton hotel chain is expanding its 10-year soap recycling program to include 5,300 properties in more than 70 countries and territories around the globe.The company made the announcement in time for Global Handwashing Day on October 15.

The company’s program helps fight the hygiene epidemic plaguing underserved communities where tens of thousands of children die needlessly due to lack of access to basic sanitation. The initiative also contributes to reducing Hilton’s overall environmental impact, which the company has set a goal to cut in half by 2030.

Hilton also announced the successful completion of its 2019 Clean the World Challenge to collect enough soap by Global Handwashing Day to be sterilized and recycled into two million new bars of soap for communities in need. The challenge generated more than 2,358,200 new bars of soap.

During the last 10 years, Hilton properties have diverted four million pounds of waste from landfills. Working with NGO partners such as Clean the World, the industry-leader is now setting the bar even higher.

“In a world where too many children die of hygiene-related illnesses, Hilton and its soap recycling partners are turning guest room waste into life-saving treasure,” said Katie Fallon, Hilton’s global head of corporate affairs.

“We are now expanding our industry-leading, global soap recycling program to all of our brands as part of our commitment to send zero soap to landfill.”

Hilton has a network of soap recycling partners around the world that support these efforts, the largest of which is Clean the World. Through these partnerships, Hilton hotels have contributed to the donation of more than 11 million new bars of recycled soap to communities in need. In 2016, Embassy Suites by Hilton, Homewood Suites by Hilton and Home2 Suites by Hilton’s 750 hotels were the first in the industry to make soap recycling a brand requirement. In January of 2019, Hilton Garden Inn and Hampton by Hilton joined the initiative.

The new brand standards, which will be applicable across the United States, Puerto Rico, Canada, the Dominican Republic, United Kingdom and Continental Europe, will significantly expand Hilton’s impact, as well as its partnership with Clean the World. Hilton’s soap recycling efforts in Europe will be supported by a new Clean the World facility which opened in Amsterdam last year. In addition, Hilton will continue its existing strong soap recycling partnerships in its Asia Pacific region, working with partners including Diversey’s Soap for Hope, Soap Aid, Soap Cycling, and Sundara India.