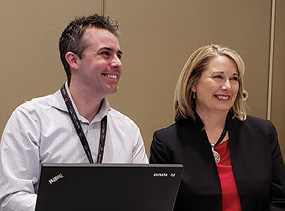 Don Patten, ergonomics specialist at WSPS, and Lisa Beech-Hawley, manager for the health and safety program at Ontario Power Generation.

Implementing a musculoskeletal disorder (MSD) prevention plan at the organizational level can lead to a measurable reduction in work-related injuries, according to a case study presented by Ontario Power Generation (OPG) at the 2019 Workplace Safety and Prevention Services Partners in Prevention Conference in Toronto.

Lisa Beech-Hawley, manager of OPG’s Health and Safety Program outlined the shift that took place within the company beginning in 2007. At that point, implementing an MSD prevention program was identified as a priority by leadership, and it was filtered down to workers using a systemic approach before becoming a fundamental building block of the utility’s culture.

“People didn’t report hazards for MSDs proactively,” Beech-Hawley said. “They didn’t report them until after someone was injured.

“This wasn’t a one-time fix-all. We did a lot of things, and we couldn’t have done it all at once. Eventually, all of it led to results.”

The first stage, which Beech-Hawley said kicked off the process in 2007, was getting buy-in and support from senior leadership for integrating an MSD prevention plan into the corporate culture and ironing out a prevention strategy implementation plan.

By 2008 and 2009, MSD prevention training was mandatory for new hires, a series of safety meetings was rolled out to better inform workers on how to identify potential MSDs, and proactive reporting was encouraged.

Between 2010 and 2012, a database of equipment was established to help workers better understand what was available to assist them at various job sites, and a separate database was created to track successes around ergonomic changes at workstations.

“We went from about 40 to 50 percent of all of our injuries being MSD down to about 23 percent,” Beech-Hawley said. “When we started this journey, everybody looked at the big, burly guy in coveralls, and if he complained about his sore knee or sore back, they called him a wimp.

“Now, it might not be perfect, I’m sure, but people feel comfortable reporting.”