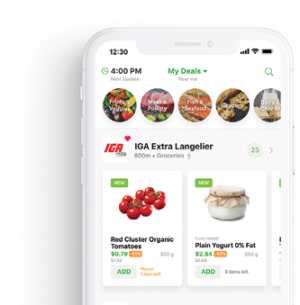 Major Canadian grocery chains Loblaw and Sobeys have introduced systems for selling marked down produce and fresh items that are close to their expiry date. Each company has partnered with an app developer to build a system that lets consumers shop online for discounted food that’s still good but might otherwise be wasted.

Through its subsidiary IGA, Sobeys launched the FoodHero app in Montreal, with plans to roll it out to five other stores then across the province.

Loblaw also launched the Flashfood app across 139 Maxi and Provigo stores in Quebec. It plans to introduce the app to customers at more than 250 stores, including Real Canadian Superstore locations in Western Canada, Loblaws and Zehrs stores in Ontario, and all Atlantic Superstore locations.

Both apps are updated with new food items daily, and allow customers to shop with their device and pick up orders in store.

Both Loblaw and Sobeys have set a goal of reducing food waste in their operations by 50 percent by 2025.