Yellowknife's evolving culture of 'shopping' at the dump 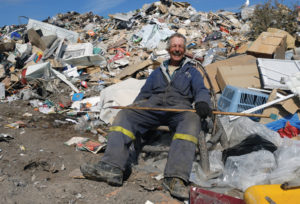 Salvager Al Shearing prepares to go on the hunt at the Yellowknife dump. (Credit: Still from the documentary “Salvage”.)

When filmmaker Amy Elliot showed up in Yellowknife for the first time in 2009, she arrived after finding and reading a series of articles called “Tales from the Dump” by Walt Humphries, a long-time Yellowknife local, and an ardent salvager at the city dump.

“I have always been interested in the transitory nature of stuff,” said Elliot. That curiosity led her to discover that Yellowknife had a thriving culture of salvaging items from the dump.

Hailing from New York, it was a long way to go for a story, but Elliot had been unable to find a closer option. Over the next five years, she made multiple trips to film the evolving story of the dump and its transition from a freewheeling past to a more carefully managed present. The story is showcased in her new documentary, “Salvage”.

Understanding the tradition of salvage in Yellowknife demands an understanding of the city’s history as a frontier outpost up to its current stature as the capital city of the Northwest Territories. Yellowknife was home to a tough, self-sufficient culture where repair, reuse, reimagination, and repurposing were all used to take an object well beyond its typical expected lifespan.

But as larger corporations began to set up offices and bring staff to Yellowknife, southern ways of doing business began to influence the city. Salvaging became more of a taboo and now many choose to order from Amazon what they can’t buy in town. 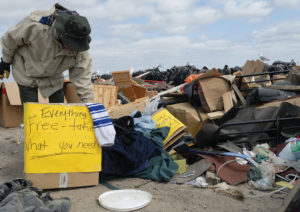 Perusing the Yellowknife dump. (Credit: Still from the documentary “Salvage”.)

The days of citizens being able to freely roam the dump came to a close as the city implemented what it calls a ‘three-cell’ system. Items deemed worthy of salvage are organized into three areas within the dump. At any given time, one cell is open to the public, while the other two are either emptied or filled by dump staff using heavy equipment. The process isn’t ideal, but the city feels the situation is safer now.

Michael Auge, manager of sustainability and solid waste, grew up in Yellowknife and can recall the free-for-all nature of the dump in the past. He pointed to greater concerns over safety as perspectives have shifted over the years.

“We’re in a more litigious society now,” said Auge. “The three-cell system isn’t complicated and allows us to keep visitors away from our machinery to cut down the risk. At the same time, there are opportunities to do things better.”

Sorting things to go into the salvage area depends on the judgment of those dropping off garbage, so a lot of items that might have been salvaged previously never get to the three cells. Construction and demolition materials are not included in the salvage area, but Auge has seen first-hand how much could be reused from that section of the dump.

“The more waste we can get out of the landfill, the better,” said Auge. “There are lessons we can take from both inside and outside of the solid waste industry. Places like ReStores are an ideal way to reroute things that otherwise would end up at the dump.”

Financial constraints have also hampered efforts that could help divert material, though Auge sees a clear need that could really improve the practice of salvaging or prevent items from showing up in the garbage in the first place.

“We need more resources and people who can help educate the public on what can be salvaged and how to sort refuse,” he said.

One such person might be Humphries, a prospector and Yellowknife resident, and the author of the “Tales from the Dump” column.

“It takes a lot of effort to find and operate a mine, and process material into finished products,” said Humphries. “People throw things away every day without realizing the value of that metal and how we could recycle it.”

Appliances, clothing, non-perishable foods, car parts, and many other items were routine finds in the past, but often go uncaptured in the current system.

“We’ve started a food rescue program because we were able to prove food was going to waste,” said Humphries. “But what happens to valuable things in dumps where there is no salvaging? Are employees pocketing the stuff to sell it? That’s lost revenue for the city.”

Humphries is optimistic about the new leadership at city hall following a recent municipal election. Where the previous council was strict in cracking down on salvaging, Humphries is quietly hopeful the new council will be better allies.

“Myself and a few others are working with the new administration to improve access to the dump,” said Humphries, of the small and informal group of salvagers lobbying the city. “When it comes to education, I’d like to see it be mandatory for school groups to get to see a dump, to see a sewage treatment plant so they can understand what happens to our waste.”

Though school trips to these facilities are only a dream, city staff are working to develop a better process, pulling on recommendations from a recent strategic plan commissioned by the city of Yellowknife. A massive document, there are only a couple of pages that speak to salvaging, but like the dump itself, there’s huge value hidden away in the report.

In southern Alberta, the town of Okotoks has been working with the Foothills Salvage and Recycling Society (FSRS) to divert usable items into a community store that helps fund community programming. The Yellowknife report suggests the FSRS system as one it could adopt. Auge sees potential in the idea and is working to find solutions that can be implemented with minimal impact on the budget.

Though Humphries and other salvagers have stayed an informal group, the drive for change may see development of an advocacy group modeled after the FSRS, to not only lobby for better solutions, but work to make those answers reality.

As all sides in Yellowknife work towards a better municipal landfill, the questions surrounding how we treat things we no longer use are reaching a broader audience. “Salvage” is on the film festival circuit, having premiered at SXSW in Austin, Texas.

“People are starting to ask if it’s time to think differently about items. They’re extrapolating out to what things might be like in their own dumps,” said Elliot. “Hopefully more people will become curious about what’s out there that can live on rather than being thrown out.”

Dean Campbell is a freelance writer based in Ottawa, Ontario.