It’s not a new idea to turn plastic bottles into something else after they’re empty. Recycled PET has long been an ingredient in products like clothing, carpets, insulation and filling for quilts and pillows. But with the growing global ban on single use items, it seems a lot more creativity and innovation is being poured into making these old bottles live again. 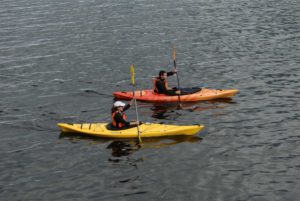 Rotationally moulded boats such as these Canadian-made ClearWater Design kayaks could potentially be made from recycled plastic combined with virgin material.

The process starts with flakes of waste plastics being separated and compounded into pellets using the patented technologies of Impact Laboratories and Impact Recycling. Then the researchers grind the pellets into a fine powder, which is blended with a proportion of new plastic (polyethylene), heated to over 200ºC and cooled within a mould to transform it into the shape of a new product.

“Our research involves testing to find the optimum combination of blending the plastics and processing conditions so that eventually Harlequin Manufacturing will be able to introduce a range of new rotomoulded products made largely from post-consumer waste,” said Peter Martin, from the Queen’s School of Mechanical and Aerospace Engineering. “It is expected waste plastic could replace around 30 percent of the new plastic required.”

“This new process will therefore have significant environmental benefits. The ability to condense and transform large volumes of recycled plastics into products designed to last many years will result in a substantial reduction in the amount of post-consumer waste.

At present, the UK rotational moulding industry alone consumes more than 38,000 tonnes of new plastic, of which more than 11,000 tonnes could be saved.

Rotocycle is a £500,000 project funded by Innovate UK, which began in January 2019 and will last for two years. The researchers are working in collaboration with Impact Laboratories Ltd in Scotland, Impact Recycling Ltd in England and Harlequin Plastics Ltd in Northern Ireland.

Researchers at the Energy Safety Research Institute (ESRI) at Swansea University in the UK have found a use for black plastics that until now have not been recyclable. The research focuses on chemical recycling which uses the constituent elements of the plastic to make new materials.

Plastics can be broken down into their elements and then bonded in different arrangements to make high value materials such as carbon nanotubes.

“Carbon nanotubes are tiny molecules with incredible physical properties. The structure of a carbon nanotube looks a piece of chicken wire wrapped into a cylinder and when carbon is arranged like this it can conduct both heat and electricity,” said Dr. Alvin Orbaek White, a Sêr Cymru II Fellow at ESRI. 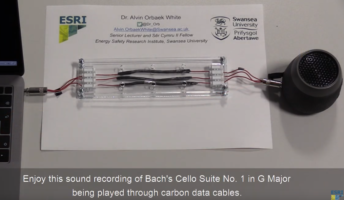 During the study, the research team tested plastics, in particular black plastics, which are commonly used as packaging in supermarkets, but can’t be easily recycled. They removed the carbon and then constructed nanotube molecules and used the nanotubes to transmit electricity to a light bulb in a demonstration.

Now they plan to make high purity carbon electrical cables using waste plastic materials and to improve the nanotube material’s electrical performance and increase the output to be ready for large-scale deployment in the next three years.

The carbon nanotubes can be used to solve the problem of electricity cables overheating and failing, which is responsible for the eight percent of electricity that is lost in transmission and distribution globally.

“This may not seem like much, but it is low because electricity cables are short, which means that power stations have to be close to the location where electricity is used, otherwise the energy is lost in transmission,” Orbaek White said.

“Many long range cables, which are made of metals, can’t operate at full capacity because they would overheat and melt. This presents a real problem for a renewable energy future using wind or solar, because the best sites are far from where people live.”