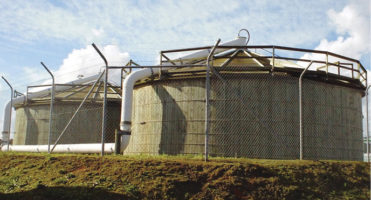 One of the most important problems with designing and maintaining a landfill is managing the leachate generated when water passes through the waste. The leachate consists of many different kinds of organic and inorganic compounds that may be either dissolved or suspended. Regardless of the nature of the compounds, they pose a potential pollution problem for local ground and surface waters.

Landfills around the world manage leachate differently. Some in developed areas are allowed to haul and discharge to the public sanitary sewer. In this case, the leachate is diluted with town sewage water and then treated using conventional means and discharged to surface waters. By diluting the high strength leachate with town water, conventional biological methods are relatively effective. However, there is a cost for hauling and a tipping fee for disposal when this method is used.

Also, the willingness of town sewer treatment plants to accept this waste is always a risk for landfill operators. Some landfills are told to pay more for discharge, or are given limits on certain pollutants that can cause problems for the town biological system.

Some landfills simply store the leachate in large ponds that keep getting bigger and bigger. In undeveloped areas, landfill operators might use whatever means are necessary to get rid of the waste, including discharging raw waste to rivers or spraying on surrounding land. Some landfills have tried to reinject leachate into the landfill with a closed circuit set up where the hydraulic loading continues to increase. Landfill failures caused by this have occurred many times, even causing fatalities, as was the case in Bogota, Colombia in 1997.

Because of these risks, landfills have sought onsite treatment options. Sequential Batch Reactors (SBR) are a type of activated sludge biological treatment system that can be used. This method will treat the effluent, but may not produce water that can be discharged to local surface waters. Thermal evaporation is a second option, although this may require special air discharge permits and can be expensive to operate unless methane gas from the landfill is available and can be used as the energy source.

Reverse Osmosis (RO) membranes are able to remove all types of pollutants from the leachate. However, conventional spiral membrane modules have many limitations on what can enter the membrane elements. These spiral membranes are almost never used for leachate treatment because of the very extensive pretreatment of the effluent that is required.

The North Waikato Regional Landfill (NWRL) near Auckland New Zealand was facing mounting costs for leachate disposal. This landfill is a state-ofthe- art, lined sanitary landfill that will cover an area of 87 hectares and will be filled to a depth of 70 metres when completed. It opened in 2005.

It was collecting and storing leachate in large holding tanks. The leachate was then transported by truck and discharged to a local town sewage treatment plant. The initial volume of leachate from the landfill was about 150 cubic metres per day and the cost for hauling was about $19 per cubic metre resulting in an annual cost of about $1 million for leachate disposal. Each year, with the expansion of waste volume and land area used, the volume of leachate expands as well. It was expected that the volume could reach 300 m3/day with a cost exceeding $2.2 million by 2020.

The owner and operator of the landfill, EnviroWaste, began looking at onsite treatment options for the leachate in early 2013. They considered biological treatments such as SBR digesters; physical/chemical methods; thermal evaporation using landfill gas for energy; and, membranes.

The landfill had a methane gas capture and purification system in place. Evaporation was not favoured because it would consume a significant portion of the gas produced, diverting it from its intended use making electricity supplied to the national power grid.

Another critical factor was that the treatment method used for this landfill would need to reduce ammonia and boron to very low levels for surface water discharge. For that reason, the biological and the chemical/physical options were removed.

Vibration to the rescue 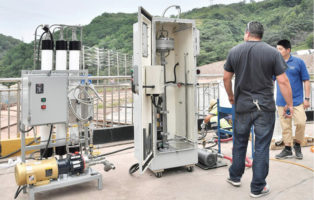 The next option considered was a reverse osmosis membrane. New Logic Research manufactures a Vibratory Shear Enhanced Processing (VSEP) system to eliminate fouling problems. The VSEP membrane module vibrates the membrane back and forth in an oscillating motion, reversing direction 50 times per second, to create massive shear right at its surface. This design also has a wide channel between the membranes to allow for high suspended solids loading without plugging.

In August of 2013, New Logic supplied a pilot VSEP system for testing with the landfill’s leachate alongside three polishing spiral RO units using a Boron selective membrane. Results from the primary VSEP RO unit and showed that the system could achieve the desired targets for treated water for surface water discharge.

With these results, EnviroWaste applied for a discharge permit. The discharge was to be to two small streams in close proximity to the landfill that would flow through storm water retention ponds. A study was done on the aquatic life inhabiting these streams.

A little fish called the Black Mudfish was the primary concern. Due to a decline in habitat, this fish is endangered and is on a watch list for controlling populations. The environmental consultant reviewed the water quality the VSEP system would produce and determined there would be no harm to the Black Mudfish or other aquatic life.

The regulatory agency issued a permit for discharge with the following limits:

Construction began on the VSEP treatment plant in November of 2015 and the final system installation and commissioning occurred in June of 2016. The plant consisted of a six-module VSEP system as the primary stage of filtration, followed by four stages of RO spiral membrane systems. At the time of commissioning, the plant was processing 450 m3/day of raw leachate with no pretreatment. 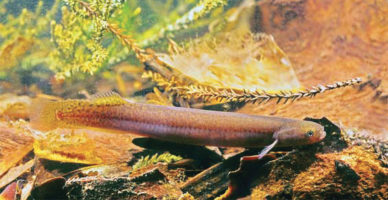 The Black Mudfish is an endangered species that inhabits the streams where the processed leachate is discharged.

The VSEP technology was proven to be an effective means of onsite treatment of the leachate, processing more volume than was needed and achieving 65 percent recovery of treated water that could be discharged to the local streams. VSEP was able to meet all of the discharge limits and produced especially low levels of boron at 0.015 mg/L (with a 0.5 mg/L limit) and ammonia at 0.11 mg/L (with a 0.5 mg/L limit). The VSEP permeate has the added benefit of being used during dry periods for dust control.

About 35 percent of the volume does remain as a concentrated leachate. One option considered to address this waste was to evaporate it. This evaporation option was improved because the evaporator size and gas consumption would be much lower, having to evaporate 35 percent of the volume instead of 100 percent. Continuing to haul this remaining leachate was also considered.

At present, the VSEP concentrate is being recirculated back to the landfill. Envirowaste may consider the evaporation option in the future if this recirculation of leachate proves to be more difficult than expected. Nearly all of the other 24 VSEP leachate projects installed use a similar method of recirculating the concentrate.

The problem with leachate in a landfill is that the volume keeps growing. Rainwater gets in and moisture from the trash adds water to the volume. There is no outlet for this water. The salts and other materials in the leachate are a fixed amount. So the problem is really a water balance issue. Having plastic liners, landfills are like giant water balloons. If the liquid volume gets to be too great they can burst. You can store leachate in ponds, but as the volume of leachate increases, the pond size must increase.

What VSEP can do is to remove water at the same rate or at a faster rate than it is arriving to the landfill. Think of the leachate collection system as a giant batch tank. Except this batch tank constantly has water added to it from rainfall. So if the VSEP acts like a kidney and just pulls water out of the loop, the materials and solids do not concentrate in the collection system because VSEP is removing water at the same rate it arrives.

The decision to install the VSEP system has saved EnviroWaste a great deal of money. The VSEP treatment costs are projected at $4.35/m3 compared to the $19/m3 that was paid previously. When processing 300 m3/day, the company is saving $1.57 million per year. The total installed project cost was about $4.35 million and the investment will pay for itself in about 2.8 years. Since the system has now been installed and running for three years, the company is already benefiting from these cost savings.

Greg Johnson is a chemical engineer and CEO of New Logic Research (NLR). He has been responsible for the development of the VSEP technology since 1992.