A solution for waterborne pollution

Rarely do founders of a company set out to make their own product obsolete, but that’s the core vision for Seabins, makers of a waste bin that filters garbage from the waters in marinas, ports, and yacht clubs.

Founders Andrew Turton and Pete Ceglinski established SeaBins in 2014 with the goal of finding a way to clean up the ocean. More than a year later, the pair launched a crowdfunding campaign, earning US$276,000 for their SeaBin design. They quickly formed a partnership to handle production and distribution and Seabins established pilot partnerships around the world to help aid the development process.

As of August 2019, more than 700 Seabins were working to clean waters in 50 countries, and the pair launched the Seabin Foundation to help educate future generations on the importance of clean waterways, and to establish better research data to aid in decision making. 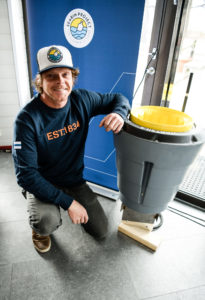 Pete Ceglinski is one of the Seabins inventors.

The Seabin itself looks very much like a garbage can that is mounted with the top rim just about at water level. Fitted with a pump, an internal bin liner made of fine mesh moves up and down, slowly drawing in water and waste from above. Clean water is pumped out from the bottom, and the waste collects in the mesh liner, which can be easily removed and emptied.

Each bin runs on electricity, tapping into the existing system in a marina, and is tethered in locations where wind and water tend to naturally push waste.

Each day, waste collected in Seabins worldwide comes to nearly 2,000 kilograms. Since the project launched, almost 115,000 kg of waste has been removed from the water.

Toronto’s Outer Harbour Marina has installed three Seabins as a pilot, and management has been impressed by the results. Each bin is capable of pulling in about four kilos of waste per day, saving marina staff the time consuming work of collecting trash manually.

“Someone in our office spotted the Seabins a few years ago, when the company was still in the crowdfunding phase,” said Mike Dwyer, marina manager for the Outer Harbour Marina for Ports Toronto.

“We have two bins in place already, with a third on the way,” Dwyer said, explaining the scope of the pilot project. “In the past, we’d have a staff person spend a big part of each day collecting garbage manually in the harbour. It’s a time-consuming process. With the Seabins, we just empty the bins once a day.” 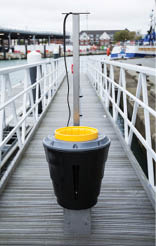 The Seabins plug in to the electrical grid that’s available at most marinas.

The savings in labour easily outpaces the $1 per day operating cost of the Seabins, quickly recovering the cost of each bin.

Dwyer also serves as a rep on the Ports Toronto sustainability committee and hopes not only to get another seven bins into the Outer Harbour Marina, but also throughout Toronto’s inner harbour. “It’s early in the talks right now, but Seabins are really promising,” he said.

Though much of the conversation around plastic and waste in water focusses on oceans, the same problem occurs in fresh water as well.

“The ocean is what brings attention to the issue,” said Chelsea Rochman, an aquatic ecologist and assistant professor with the department of ecology and evolutionary biology at the University of Toronto. “But a lot of ocean plastic flows from rivers and watersheds.”

The result is that microplastics – pieces smaller than 5 mm across – have much higher concentration in lakes and rivers than in the ocean.

“When we sample fish in the ocean, we find that perhaps one in ten has ingested microplastics. In lakes and rivers, virtually every fish we check has microplastics inside.”

Rochman works closely with Ports Toronto to help evaluate the effectiveness of the Seabins. Each day, the bins will collect over 1,000 pieces of plastics from the waters in the harbour.

“They work beautifully,” said Rochman. The question she’s now working to answer is whether Seabins are enough to solve the problem.

The bins collect waste after it has entered the aquatic system, but are too far downstream of the source to stop the problem at the root. However, as part of a suite of tools, they have great potential.

“There are tools that can stop plastics from entering sewers, or filter plastics from river flows, but the Seabin is alone in terms of collecting plastics and waste from marina and harbour environments,” said Rochman. “We just need to figure out how many are needed to address the problem.”

Visit www.seabinproject.com to learn more about Seabins and the Seabin Foundation.