We must move the date with a plan, not a pandemic

Humanity requires 1.6 planets to meet its current demand for natural resources. Put simply, we are living beyond our resource means. To combat this ever-growing problem, a blueprint for change must be implemented – something which tomorrow’s Earth Overshoot Day champions.

Earth Overshoot Day is the date each year that marks when society has used up the amount of natural resources the planet can regenerate within a year. The date moves based on how quickly society has consumed the planet’s resources in a given year and has been moving earlier and earlier each year since it was first calculated in 1987.

This year, however, Earth Overshoot Day suddenly shifted almost a month later – primarily caused by the coronavirus pandemic, and the changes in consumer and business behavior it brought about.

Echoing the organization’s 2020 statement, “true sustainability that allows all to thrive on earth can only be achieved by design, not disaster,” society needs to reassess its systems and introduce a new plan to reduce the ecological strain placed on the planet.

How is Earth Overshoot Day calculated? 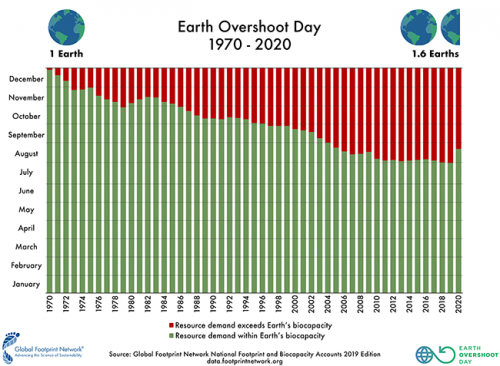 Earth Overshoot Day is calculated by dividing the Earth’s biocapacity (i.e. the total amount of resources generated by the planet in a single year) by humanity’s actual ecological footprint (i.e. the amount of resources consumed by humanity in a single year). That number is then multiplied by 365 to find out which day of the year the planet’s biocapacity is exceeded.

As well as highlighting the challenges associated with our planet’s biocapacity, this year’s date also acknowledges the impact of Covid-19. This has had a devastating impact on health and economies, though conversely created positives from a sustainability perspective, such as a reduction in emissions caused by travel and less reliance on fossil fuels, which have pushed the date back by nearly four weeks compared to last year.

What the pandemic has shown, among other things, is how quickly behaviors can change when society demands it and the entire globe works together in times of crisis. The crisis of environmental sustainability has been on the horizon for some time, and the pandemic has proven that collectively everyone can quickly make an impact. To maintain this momentum into the future, however, there needs to be a systematic change in design and processes to support a sustainable future, starting now.

For Earth Overshoot Day, the actual ecological footprint is measured by looking at activities such as the food waste created during production, distribution, and consumption; the build-up of CO₂ created by humanity’s energy usage; the reliance on resources extracted from the planet such as oil; and the health of our biological resources, like the soil, water and air.

Winning the fight against food waste

The ongoing battle against food waste and loss is one which is well documented, and this problem is causing a significant impact on society’s ecological footprint.

Food waste currently contributes to nine percent of the total amount of resources consumed by humanity, with approximately a third of all produced food being lost during the production process. Of the total food wasted, the biggest contributor to this is fruit and vegetables, which has a wastage percentage of around 40-50% due to their perishable nature.

The problem of food waste hasn’t been helped over recent months by disruption to supply chains caused by lockdown restrictions, reducing demand for the food service industry with the closure of hotels, restaurants and catering providers. This has led to crops and produce being left to rot and perish during the pandemic, increasing the amount of food wasted at production and distribution stages.

This is also a wider supply chain issue, as consumers are still creating huge amounts of food waste, too – and have been way before the pandemic started. In the EU alone, more than 47 million tons of food is wasted by households, according the figures from the European Commission.

There must be a collective effort at every stage to enable efficient handling of our food resources and prevent waste. By reducing humanity’s food waste by 50 per cent, Earth Overshoot Day can be pushed back by a further 11 days, highlighting the impact such achievable changes can have. If growers, processors, retailers and consumers all adopt systematic and behavioral changes towards the production, handling and consumption of food, major steps towards a more sustainable future can be made.

Innovation needs to be adopted to formulate an approach which cuts food waste and loss. For decades, TOMRA has developed efficient sorting and grading technology and if implemented early in the supply chain, the risk of waste can be reduced during the latter stages (e.g. retail and consumption).

Also, sorting and grading solutions separate food which is not acceptable for the consumer and retail environment, diverting it for alternative uses such as processed food or animal feed. This ensures nothing goes to waste and a more sustainable handling of food can be promoted.

To mitigate humanity’s demand for resources, there also needs to be a widespread adoption of effective waste handling models. By doing so, a greater level of waste sorting can enable a waste management system that promotes best sustainable practices, reducing waste in the process.

Adhering to a model which focuses on reducing, reusing and recycling at each stage of a product lifecycle – from its initial design process to its end use – can promote sustainable material use and keep resources within a closed loop. In short, the reduce, reuse and recycle model helps eliminate waste and protect the environment.

The model aims to reduce the amount of material used in the initial design and packaging of a product and ensure as much of the material as possible can be reused to extend the product’s lifecycle.

Once the amount of material has been reduced during production and consumption and then reused to its fullest potential, the final part of the model is to recycle. Recycling is a key driver of the circular economy and keeping resources within a closed loop, using innovative methods to create products and packaging which contain the maximum amount of recycled content. Today only 2% of plastic packaging globally is maintained in a closed loop, meaning the material can be used for the same purpose (e.g. bottle-to-bottle recycling), and TOMRA has pledged to increase this figure to 30% by 2030.

By adhering to this ethos, it is possible to lessen our dependence on virgin materials which may cause damage to the environment. In turn, this has the potential to lessen the ecological deficit and reduce the impact of a carbon footprint created by manufacturing.

Reducing the requirement for limited resources

Earth Overshoot Day focuses on the efficiencies on how resources are used, and emphasis must be placed on reducing the use of our more limited resources – in particular, oil. It takes a quarter of a liter of oil to produce a single one-liter water bottle from virgin plastic and when more than a million plastic bottles are being sold every minute, the total volume of oil used is vast.

But the production of the bottle isn’t the only problem. Post-consumption, plastic beverage containers that are not placed within a recycling system are entering the environment, causing terrestrial and marine litter and damaging our biological resources, such as soil and water.

Both oil production and litter can be reduced by recycling containers in a continuous loop. Most plastics, including those used to create beverage containers, are highly recyclable and can be reused in the production of new containers. This doesn’t just go for plastic containers – aluminum can also be used over and over again, and glass is considered a permanent material which can be endlessly recycled. To keep materials in the loop, we need to be smarter in how we design recycling and waste management systems.

A way to encourage consumers to return their beverage containers for reuse and recycling is through systems such as deposit return schemes (DRS). A DRS adds a small deposit on top of the price of the beverage, which is refunded to the consumer when they return their containers. This incentivization has proven itself capable of keeping resources within a closed loop – for example, within two years of a DRS being introduced in Lithuania, return rates increased from 34% to 92%.

A DRS offers an efficient collection service which enables materials to be separated, and allowing them to be kept clean and pure. This ensures the material can be used to meet food-grade quality standards, so it can become new bottles, whilst eliminating the need to extract more virgin material.

Alongside the efforts of consumers, manufacturers must also be prompted to use the recycled materials in the production of new containers to reduce the planet’s ecological footprint. The Single-Use Plastics Directive has set the goals of plastic beverage containers to comprise at least 25% recycled content by 2025 and 30% as of 2030, meaning there will be an increase in the use of recycled materials to produce new containers, rather than relying on virgin oil resources.

Our ongoing support to #MoveTheDate

Across all our business streams, TOMRA supports the ongoing efforts to force the date of Earth Overshoot Day even later. Sustainability is embedded into our strategy and core business activities to create long-term value and a better future for the planet.

A new blueprint needs to be designed to reduce humanity’s ecological footprint and enable a sustainable future. This year has seen the Earth Overshoot Day fall later due to the implications brought by the pandemic, but it shows how quickly society can change its behaviors when it’s required and can work together when the planet demands. However, changes are required to sustain this in the long term.

To promote a more efficient use of our resources, industries, governments and policymakers must collaborate with one another and promote the positive impacts of sustainability on our planet and how the changes everyone adopts can make a difference. This way, we can #MoveTheDate together.