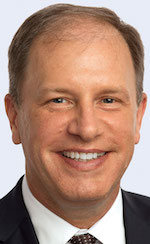 Kirsch was most recently president of Chemours’s US$2.7 billion-per-year fluorochemical operation. He also previously held positions as vice-president at XM Satellite Radio, vice president at Hughes Telematics, and president of automotive, metals, and aerospace at Henkel.

“We are excited to have him at the helm, giving us an experienced, steady hand as we quickly magnify our unique services for companies of all sizes across the country who are working to stay compliant with e-waste disposal.”

4THBIN ensures that old IT assets, whether laptops or Cloud-based, are ethically and securely destroyed to the highest standards, in compliance with federal, state, HIPAA and GLBA regulations. As a certified B Corporation, 4THBIN is a member of the UN Global Compact initiative and the Coalition of American Electronics Recycling and was awarded the U.S. Environmental Protection Agency’s Environmental Champion Award in 2015.